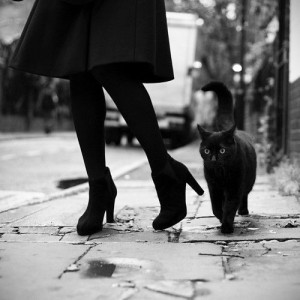 You cannot live with a paw in each world.

-Erin Hunter, Into the Wild

A simple walk through the park.

As she wept over her loss, she came across a lovely cat. It’s fur was black with filth, and it’s long tail had been cut short. Her mind told her that she had found the cat first, but both her heart and the cat knew that it had found her first. Her eyes made contact with it’s own mysterious yellow orbs, and for seconds, they simply continued to gaze at one another. In all honesty, it was not her first time seeing the cat, it was just that she had paid it little mind. The cat was known to stray around the park by itself, minding it’s own business. It bothered nobody but those who chose to delve their hands in first.

She gave it pats on the head a few times then and again and stroked it’s beautiful fur. There had even been a time she had once played with it. Infatuated with her own personal joy, she treated the cat too roughly, and it scratched her―.

But today, as she lamented over her lost key, her interest suddenly grew. The cat was suddenly…alluring. A filthy animal was…fascinating

So she took it home.

She bathed it. For hours she scrubbed, and lavished her expensive soaps and cleansers. But still, the cat remained black. A peculiar thing it was. How greatly it displeased her. But she paid it no mind. She could always make it look nice.

Out of the tub.

Dress upon dress. She flung white skirts. White coats. White boots. Everything she had.

She dolled it up.

She fed it white tuna. Caviar.  The finest of fine salmon.

It was a comfort.

It was a pain.

But then out of thin air it came. The cat silently entered the room without her awareness. As she spoke to her guest, it went about the house, leaving smudges of dirt around the place. It crawled along her white floor. Her dusted white mantles. Her wiped down white counter-tops. Her vacuumed white carpet…

It approached her, allowing dirt to trail behind each of it’s silent, sneaky footsteps. Lastly, it hopped into her lap and lay it’s head down comfortably.

“Right on my pretty white skirt!” She screamed.

And he was gone.

The cat crawled up to her. It nuzzled her, gave her warmth. She pushed it off her body.

“Away with you.” She seethed. And away it went. With no struggle. No haste. It was gone.

Her relief soon turned to sorrow. As soon had she sent it away she wanted it back.

She called, mewed, even bellowed its name.

It waited some time before it returned. The cat waited for her to long.

And when it finally came back, it returned as easily as it had left.

The cat once again made itself comfortable in her lap. She reached for the remaining white wine her guest hadn’t finished.

“What a waste.” She mumbled to herself as she stirred the drink in her hand in a circular motion. She pressed the edge of the glass to her lips.

“I wonder of the taste…” She murmured as she stroked the coat of the kitten.

It didn’t move. It didn’t stir.

It had always been sleeping.