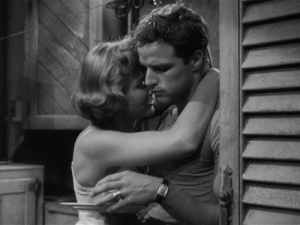 I have never cried over a book, but after reading Tennessee William’s A Streetcar Named Desire, something hit me. I pored over the text trying to understand what it was that made me so upset but I couldn’t quite assemble the pieces, until I realized it was the unmistakable presence of desire and absence of love in the relationship of Stanley and Stella.

From the beginning, readers understand Stanley as an extremely dominant figure, meeting all the criteria of complete masculinity. He is constantly described as animalistic both in regards to his drive to win any fight or game one has challenged him to, and his tendency to sexualize every woman he meets. Such a man has very primal and simple desires in life, the main one being his sexual needs fulfilled. In class the idea of Stella and Stanley’s life before marriage was brought up and really resonated with me. As much as she has adapted to new circumstances, Stella was born and raised in the Old South, taking those ideals about a relationship between a man and woman to New Orleans. When Stanley entered her life, she was unmistakably drawn to him, but likely wouldn’t give up everything she had learned about being a lady for a common man, no matter how exciting and adventurous it was. This became a chase to Stanley, who responded in the same way any animal would- he hunted and fought until he got what he wanted. (In this case, the woman he lusted over)

Their wedding passed, but Stella and Stanley were still known by all for their sexual chemistry. Stanley had attained a wife who satisfied his needs without complaint, and this led him to become extremely possessive of her. She was now his territory, a piece of his life that he had to protect with all his being. At the end of scene three, after Stanley realizes he had hurt Stella, he calls up to Eunice and cries, “I want my baby down here….I want my girl to come down with me!” (66) I don’t see him doing this out of love; it’s more a desperate plea to regain what he has worked so hard to achieve- a life with Stella, a family, and a good home. He also refers to her as HIS baby and HIS girl, reinforcing the idea of possession.

She then proceeds to go back to him, where the stage directions say, “They stare at each other. Then they come together with low, animal moans. He falls to his knees on the steps and presses his face to her belly, curving with a little maternity.” (67) At first, I saw this as a very romantic gesture. He was showing his wife how much he cared for her and the baby they were going to have. After analyzing this again, my perception has completely shifted. Having and protecting a child is another example of something extremely primal. One of the main goals of an animal is to carry out his lifeline, and Stanley shows this same urge. It wasn’t a sign of love at all. The couple did sleep together right after this, showing how their fights usually end with them making up by having sex.

Perhaps the most important piece of evidence to support the overwhelming sense of desire in their relationship was on the last page of the play. Stella is distraught after the doctor has taken Blanche away. Stanley soothes her by saying, “Now, honey. Now, love. Now, now, love. [He kneels beside her and his fingers find the opening of her blouse] Now, now, love. Now, love….” (179) In this moment, where a husband who truly loved his wife would be more interested in her mental wellbeing rather than his wants, he decides to feel her up. This is literally happening as she holds their newborn baby. Stanley is taking away that motherhood from her and bringing the basis of their relationship back, which is lust.

I think the reason I was so upset over this was that I desperately wanted Stanley to love Stella, in an attempt to not justify but make sense of all he did to protect her and the life he had. In retrospect, I now think he was protecting himself from Blanche and all of this was simply a game to him. I don’t know if I’ll ever be able to fully grasp the concept of this, but I took this piece as a warning of characters like Stanley, whom I tend to encounter over and over again.

2 thoughts on “Desire vs. Love”