**Author’s note: the passage being analyzed below is Creon’s argumentation on pages 36-37** 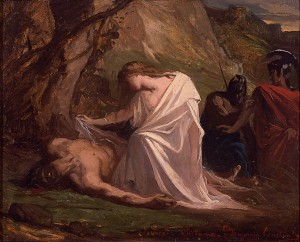 In order to contrast the inevitable hands of fate, there appears of be a trend in human nature to diverge from the aforementioned statement, and to control one’s own destiny instead; such is the mindset portrayed by Creon in the passage. To promote this mentality, he evokes a form of argumentation whose essence serves to sway the immovable Antigone from her stance on the futility of the human desire for control. To carry forth this motive, he relies on sentence structure, as well as its teamwork with diction.

Throughout Creon’s speech, his sentence organization is repetitive; but not all redundancy is meaningless, especially when it is poetic. In this case, the anaphora within the passage evokes pathos in how it synthesizes a desperate tone for Antigone to unify her beliefs with his; a unification that mirrors the appearance of anaphora in and of itself. Within a series of rhetorical questions, he recycles the following sentence structure: “Was that a time […]”. However, the significance lies in how this trend is actually interrupted with “[…], do you think, […]” as an expletive. This interjection forces the reader to reconsider the phrases proximate to the expletive; that is, “a time” and “playing”. As a result, one is led to believe that perhaps blindly accepting the predetermined path that is laid out for an individual is a childish and naïve response to “play-” at. Furthermore, upon closer look, the chosen words of repetition also contrast one another – while the recurrence of the phrase “nameless” and “into the mob” familiarizes the audience with a sense of insignificance, the reappearance of the word “You” as sentence starters in continuous sentence is a force to be reckoned with because it stresses and encourages individual-driven action. That is, the power of taking responsibility for the anarchy in one’s environment and striving to tame it. Thus, as a form of juxtaposition, Creon essentially follows his previous implication of childishness with a call to redemption from naïve irresponsibility to maturity. To amplify this, as Creon proclaims “You grab the wheel, you right the ship in the face of a mountain of water”, the omission of a conjunction paired with the repetition of “you” reinforces the notion that individuals ought to remain alert in steering one’s fate with a determined demeanor; in having faith that fate is not inevitable; in remembering that control of one’s destination is not futile. In order to further his argument, Creon additionally harmonizes his syntax structure with his diction.

As a means for strengthening his persuasion against Antigone, Creon exploited the effect of diction. Before its full effect can take place, however, one must notice the harmony between his sentence structure and diction, as it is a means of amplifying his pathos within the argument. The significance of Creon’s maneuvering of sentence structure lies not in what he used, but how he used it. In other words, the format of his sentence lengths, in spite of its pedantic nature, had innately produced an image of anarchy; the semblance of a typhoon. Aided by his sentence structure, the way in which his speech becomes increasingly complex mirrors the vision of unraveling. That is to say, it is implied how if fate is a predetermined knitted article, then Creon is the catalyst that promotes the unraveling of fate’s sewing and knitting. However, his sentence organization is simply a precursor the effects of his diction. As Creon states that how the ship, representing his country, had “sprung a hundred leaks”, it becomes crucial to investigate the diction “sprung”. By definition, it demonstrates the release of something from its coiled position and connotes a sense of the anarchy and chaos that follows storms and typhoons. Essentially, it is a reference to an analogy that was made by the chorus earlier in the play, declaring that fate essentially acts as a “spring”. As a result, Creon’s word choice has inherently foreshadowed the paramount weight on one’s choice to thoughtlessly allow fate’s plans to spring forth; it results in “leaks” that may very well sink a ship and destroy one’s country. Through the illustration of consequences, he makes an implied plea towards Antigone to cease executing her careless acts. One’s psychological state will often be mirrored in their choice of words when speaking, and as Creon utilizes words such as “splitting” and “rip” in his imagery of a ship, the audience is also subsequently left with the impression of how he desires to reciprocate the storm’s actions and do the same to fate.  In such a fashion, Creon’s diction becomes an embodiment of his pathos, and his unraveling structure swallows up the audience just as the metaphorical ship is swallowed by water. The reason why, perhaps, is because when one is arguing with an entity as illogical as fate, emotion is the most effective element to manipulate.

In order to sway the headstrong Antigone in fully understanding his perspective, Creon wastes no time in assembling both syntax structure and diction to move his point of view forward. That is to say, the necessity of being able to stand strong against fate and steering one’s destiny away from a supposedly predetermined path is consistently supported by the pillars of pathos throughout his speech.