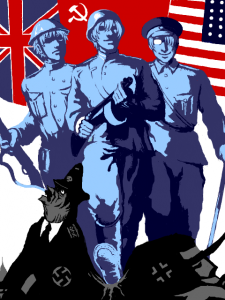 The hypnotic cadences of his jubilant exclamations, drew me in, tangling me in a web of bravery, honour, and glory. I could only watch, my mind being disconnected from my body. I could only watch. His kindly face, young and old at the same time, bursting with an almost youthful vigour that rivaled the energy of young men. His eyes blazed with a fierce light, wordlessly promising heaven and earth for his nation. He was an unassuming old man, neither strong nor limber physically, but his mind sharp. He is a Lion, prowling, nose upturned towards the Eagle.

He is Winston Churchill.

My back was ramrod straight, eyes wide to the point where they watered from the chilly October air. The wind whipped, tossing strands of my hair into my eyes, yet left the man on the podium untouched. He looked absolutely regal, hands clasped on the edges of the mahogany, oak dais, polished to perfection, worn by the many hands that held it so reverently. The Prime Minister leaned forward, eyes skipping from each boy to the next before stopping at mine.

At that moment, there was a hint of a smile, a hint of an amused glimmer in his eyes as he gave the tiniest of nods to me. Only me. I sat up straighter, hands clasped together in a white-knuckled grip, my chest puffed out in pride.

There he was, standing in my school. So regal, and proud.

Just like the Lion of lore, claws outstretched, muscles rippling underneath its pelt, intent on grabbing the soaring Eagle.

So dangerous, and sly.

Just like the Lion of lore, claws digging into the flesh of the evil Eagle, lips pulled back in a roar while the eagle screeched in fear and anger. Step forward, brave Americans, brave Britons, brave Russians. Stamp out the Evil that is Hitler.

Set during the Battle of Britain
2 days before the end of the Battle
On October 29, 1940
The same day that Prime Minister Churchill made his “Never Give In” speech 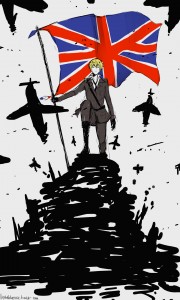 I shook my head free of thoughts, feeling the adrenaline pump through my veins. My eyes were sharp, mouth slightly open, as I took breath after breath of life. The screams of the engines deafened my ears, the acrid scent of gunpowder and smoke wafting up my nostrils. My hands held the control stick, knuckles stiff with force. My sandy-blond hair clung to my forehead, rivulets of sweat flowing down my face.

“Alright boys! Let’s make Ol’ Blimey proud!” My lips pulled back, smirking at the whoops of his men. “Bring down the damn krauts, and their Luftwaffe!” I yanked my stick to the side, my fighter plane rolling to the side to avoid a barrage of slugs from a luftwaffe, ecstatic to find the machinery follow my commands so fluidly. I gave a harsh curse, jerking the plane upwards, and settling behind the enemy, shooting at him.

There was no honour.

There was no glory.

There was only death.

Kill or be killed.

I gave a manic laugh, reveling in the explosion of the luftwaffe. One less enemy to deal with. My mind was chaotic. Where were my values? Where were my morals? Should I spare the lives of these Krauts? No, people will die. I shook my head again, lips peeled back in a snarl.

We are the Lion of Lore.

We are the Lion of Lore.

Believe in honour, and glory.

I took a deep breath, and shot.

All images found on: http://f***yeahhistoricalhetalia.tumblr.com

2 thoughts on “Lion of Lore”