It was raining that day. In the rain, stood a girl, standing in front of a graveyard. Her eyes were red after having what could have been thousands of tears flow through them; her face pale after her choice to stop eating. She had been visiting this place for the past 5 days, spending her entire day standing. People passing by would always give her a strange look as they past her, not understanding her pain, not understanding what she had lost. She no longer felt any attachment to this world. Everyone she loved and cared for was gone. She was alone. She was an orphan.

This is how many people perceive death, in my opinion. Not in the literal sense, but the actual emotion of the girl. People feel sadness at the death of other people. They mourn for them, remembering all the memories they had with them. Some people feel sadness for those who have past, thinking that those people have lost everything. In my opinion, this is not how people should think. 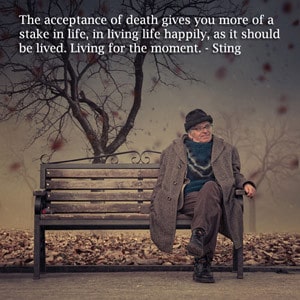 The fear of death follows from the fear of life. A man who lives fully is prepared to die at any time.
-Mark Twain

Humans all have a natural tendency to fear the unknown. We don’t know what happens after death, which I believe is a reason as to why some of us fear death. We don’t know what happens after death, so we try to stay as far away from it as we can. Doing so is completely fine; however, the problem arises when people take this fear to the extremes. Some people do not live their lives to the fullest, due to a fear of death. In your heart, you may be thinking about sky diving, travelling further into the depths of the universe, or maybe even something as simple as going on that roller-coaster that you’ve always wanted to go on (although some people may not be afraid of death in this case), but you don’t do this. Why? You’re afraid you might die, or get injured at the very least. To me, this fear limits us to such an extent, that without it, we would be amazed at what we could do. I understand that people don’t want to just walk recklessly into their death (in fact, I’m pretty much the same), but we shouldn’t let our fear of death control us.

The life of the dead is placed in the memory of the living.
-Marcus Tullius Cicero

I think people, in general, should accept death. If an important person in your life has died, then yes, you should mourn for them. You should keep them alive in your memory; but you shouldn’t constantly complain about the unfairness of that person’s death. That person cannot be bought back by constantly complaining about the unfairness of their death. It’s sad, but it’s the truth. The greatest gift you can give to someone who is dead, is to remember them. Death is not something we should constantly hate; it is something that we should, gradually, come to accept. I understand that it’s no simple feat. There are uncontrollable emotions that come forth as one witnesses death in their life. Feelings of loss, sadness, and sometimes even depression can result when one faces death. Accepting death does not mean to forgo any feeling of sadness when you have to face it; that’s not what accepting death means. In my opinion, accepting death means to let go of your negative feelings after some time. It means to let that person remain at peace in their death, but to keep them alive in your memories.

While death involves taking one’s life away, it also adds meaning to it. Life is worth living, because you know that eventually, you will pass away. That’s why we see life as being so valuable. We know that it will be taken away from us, so we try to keep it to ourselves for as long as we can. Would there be any purpose to life if we were able to live forever? There would be no meaning in life. People would not care about what they did, or when they did it, because we would not have to worry about death.

Life and death are interconnected. You cannot have one without the other. Both are the most complex phenomena known to humans. People are affected equally by both. People need to be able to be able to accept both. It’s quite easy when faced with life, because witnessing life only brings forth positive emotions. In stark contrast, death is nigh impossible, but nonetheless just as important. By accepting the fact that death is inevitable, you understand the value of life. You understand how you should live your life to the fullest, because there will come a time when you won’t be able to do so anymore.

3 thoughts on “Death In Society”