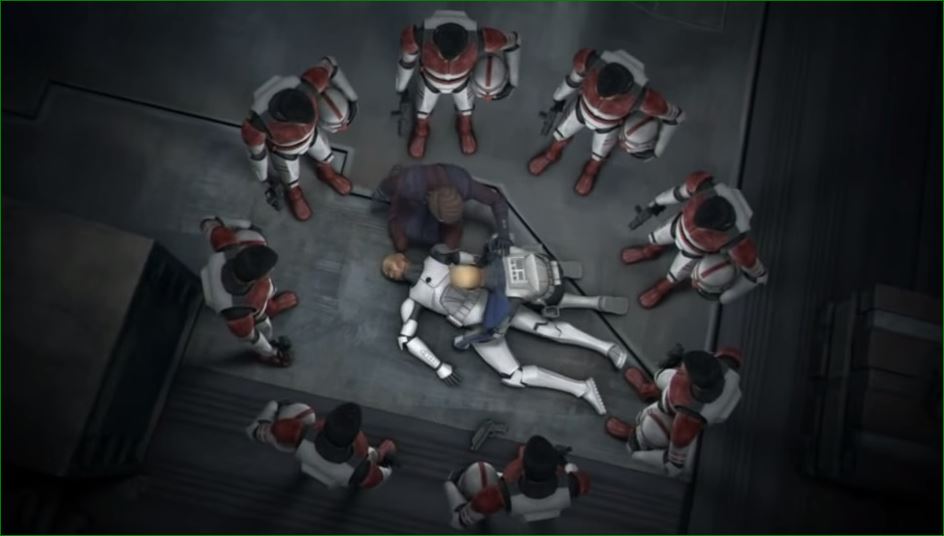 I want to tell a story. The following is a short story I had written as a tribute to my favorite TV show as a child; Star Wars: The Clone Wars. This show had had a tremendous impact on my life and worldview, every episode was filled with a moral lesson as well as the relevant internal conflict we face in our lives. We all have in our childhoods something we attach ourselves to, this was what I had attached myself to, it is a piece of my heart; a piece of my soul to which I want to share with the world.

We are the Clones

I was just another clone, waiting for my turn to be slaughtered in a war I was forced to fight in. To them I was expendable just like the rest of my brothers; had one of us had been killed there were over ten thousand ready to replace us. We were simple mindless soldiers; biologically engineered to obey direct orders and ask no questions, even at the cost of our own lives. I was brought into existence by the very cause that tries to kill me every day, this war. To them I had no worth, I was only created fight and die, but none of us had thought of it that way, we always believed there was a special place for us clones. We were complete mirrors of each other. Even though we all had the same face, we all saw something different in each other. We saw in each other a fire that could not be extinguished, a will that made us the perfect team, the perfect army but most importantly the perfect family.

This war had torn the galaxy apart. In a desperate attempt to unify the galaxy, a legislation had been passed; a legislation that had brought us into existence. Our enemy had also amassed an army. One made of cold metal and mechanical hearts. The droids, merciless enforcers of the enemy’s army were programed to kill and cause pain to the innocent. They were an army without spirit or compassion, just programed to kill and cause pain to others. We on the contrary were men of valour; always stepping up to face real danger. Never once had any of us backed down from a fight, never once had we ever given up on anything despite our predetermined fate from the moment we are “born” from our growth cambers. There is no guarantee of survival for any soldier, no guarantee of safety either; but we fight knowing we are making a difference in peoples’ lives. We fight knowing we bring freedom to those that had theirs stolen. We fight knowing that we could be fighting for the last time, but that thought is drowned when we know we fight knowing that we making a difference in other’s lives. Our creators and commissioners may not see it, but what we fight for is peace, and justice. We clones had always the spirit to fight; we will always fight until the last man. None of us would go down in vain; none of us would die a meaningless death.

Engineered to be or not, we all had different personalities, at times shocking personalities. All of us were told we were taught how to control our fear, think decisively and endure the unendurable; absolutely nothing had ever prepared for the moment when we face death on the battle field. A substantial number of my brothers had enjoyed watching the enemy fall by their hand; it was sick, but justifiable, they had all watched their brothers die and felt the need to exact their vengeance. I for one, I never had the stomach to watch my troops, my brothers, get shot with bolts of hot laser. At the end of every battle I always failed to see personal victory, a victory for us clones, just us clones; I always pitied the new recruits, such bright enthusiastic soldiers turned colder than ice just after their first battle, after their first loss. I had always admired our perseverance, despite seeing our brothers die in front of us, and no guarantee that we would live after the next encounter with our enemy had never stopped us from giving up.

We always understood each other’s feelings, always helped each other through the most difficult times. We are in fact not mindless duplicates of each other, we are brothers, we are family, and that’s what they don’t see. Between all of us there had been a strong, unbreakable bond present, regardless if we had met or not. Though we all had thought of ourselves to be different we had always felt a deep connection with one another. Never once had we ever forgotten the importance of family, the importance of brotherhood. We had always fought as one, were the perfect team. I will always love my brothers and will never turn by back on them. We are not beings of the same mentality; we are beings of the same heart and blood.

One thought on “We are the Clones”