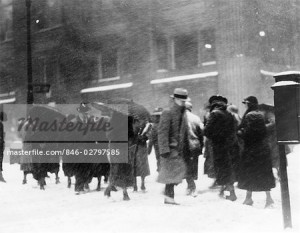 There is that girl. She walks. Passes by strangers, her every breath causes a haze of fog to conjure within the fronts of her vision. She clenches the cold fabric of her pockets tighter. It is cold, as it’s always known to have been. She is freezing, yet defiant against the frosty air. Pitifully rebellious in the form society has shaped her to become. Her thin coat offers minuscule protection, yet it would be peculiar to wear a warm thick coat. She combats against the chill, with the scraps society enforces her to wear, but the cold always wins. Another exhale, another cloud of the frigid air is formed. She observes the people who walk past her. They always walk by, oblivious to her stares. And still she walks, her gaze upon others, yet her thoughts abide within realms unfathomable. Her eyes hollow, she gives the quietest whisper of a laugh, she shakes her head to the side. Turns a corner. Keeps walking ahead.

She speculates how in life she supposes she is residing within several problematic situations. Stupid. Others, with missing limbs, regard their existence as a blessing. How such insignificant things cause her to bury her true self deeper. Stupid. How she causes these things to shape her very being. It is all senseless. Then it becomes too late. It’s always too late. An exasperated laugh. Her thoughts cause her eyes to hold astuteness, as if she is seemingly now wise. She buries herself deeper, her eager urge to speak, eyes shining, yet she halts herself.

She continues to watch. A man ahead, his eyes are not down cast, neither is his gaze straight, its fixated upon her. She forces herself to stare at the pasty sidewalk and continue walking. He spoiled it. Her insecurities rise forth, her long hair falls concealing her face. Hands trembling with suppressed anger. She retreats within the depths of her coat, her confident gait belittled to that of a shy diminutive girl. She walks, now irritated with her flaws.

She overthinks, incorrectly rationalizes. Her encounter causes her to recall what had occurred earlier that day. Her supposed friend, constantly reduces her self-worth. Laughed at her voice, said how she was naive, her perceptions insignificant, how foolish they were. Maybe if she let her speak, encouraged her, she would be at least something worth her time. Always the outspoken one, her confidant is. Adira is the dust, irritating her whilst she’s abides within her grandeur. Afloat, yet insignificant. A bitter laugh. She buries herself deeper until she herself ceases to understand who she is. Feigns absurdness and pretends to be feeble-minded, at least she becomes something acknowledgeable then. So ecstatic, about the opportunities she has been presented. Yet keeps that excitement bottled until that’s its rendered itself into sadness. Afraid of being conceptualized as conceited, of presenting herself as privileged.

The man walks, fascinated by the exquisite woman that had caught his gaze yet just as quickly dismissed him. She entranced him, yet her lips were set in a grim line, eyes narrowed and fixed downward. He kept walking.

Adira walks along, hands still trembling, but from fatigue and worry. Her sensible deliberations, capable of diminishing ignorance and causing the acceptance of individuality remain as such, silent thoughts withholding cries capable of haunting polluted souls. Her inward shrieks fail to bring the change she desperately seeks. She walks faster. She needs it. Speak. Adira speak. She is a fly entrapped within a spider’s daunting web. A feeble “can’t” escapes her. Oh my darling, but you always could.

Knowing, yet unaware, we somehow always walk by.

2 thoughts on “How We Always Walk By”