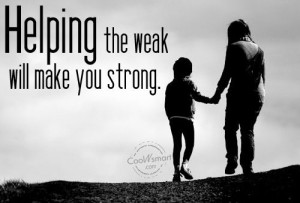 I believe in the word help. People go by every day, living on scraps, while others hold on to their billions of dollars simply for the sake of having it.

There has been one statistic that has always shocked me, every time I even think about it. “If the United States alone gave even 1/8th of the money they put toward their Nuclear Weapons program to Africa, the entirety of the continent would be modernized within 10 years.” If America took one eighth of their money, not even going toward their weapons in general, but Nuclear weapons at that… and an entire continent, widely recognized as one of the poorest ares in the world, could become a society of educated, independent individuals.

The statistics are crazy, and that’s just the USA. Think about the stuff humanity could achieve if we could just come together as one, a single species, and help the world become something greater, something beyond our wildest dreams.

Honestly, the answer in its raw, bare form is selfishness. We have the potential to make a huge impact on the world, but we don’t, as we see no personal gain, no incentive. Some of us would kill to eat that plate full of food that you said wasn’t tasty enough, and threw away. In many places around the world, people scavenge landfills looking for something to eat or use. It puts the saying “One man’s trash is another man’s treasure” in perspective, a perspective far too real. 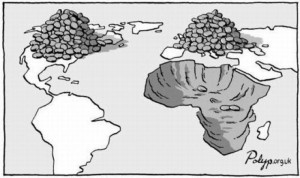 I believe that everyone should do their own little part in helping something, someone. Volunteer, donate, those are bigger ones, it can be so small as helping your little sister with her math homework. We need to build a society that is constructive, based on positive growth, not stealing from the poor and giving to the rich. And we can do it, but we need to start with helping others, and being kind.

That’s what I believe in.

Sources (In order of appearance)

One thought on “This I believe…”