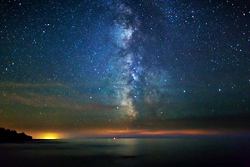 I believe in believing.

But what is believing?

Perhaps it is when the mind constantly reiterates to the heart the details it has gathered from the outside world in its efforts to persuade you into believing something similar to the dominating societal beliefs of today’s population. However, maybe it is the heart that attempts to influence the mind, telling it to pursue the distinct beliefs that it has created, the ones that are unique to your person. Or maybe it’s your gut, that provides you with a deep and unknowing conviction in the pit of your stomach, that says whatever this is, it feels right.

There are many ways to define what it means to ‘believe’ but I think that it simply means to know that somewhere within your being, the given concept resonates and epitomizes who you are, or who you strive to become.

Maybe that belief consists of the more mysterious things in life, such as the belief in a God. One who reigns over the Earth and provides guidance as to how to live your life; or one who is everything and presents the world with an overwhelming feeling of connectivity and oneness with each other and one’s surroundings.

Maybe it’s the belief that in the great depths of the ocean lies the answers to the universe, guarded by the bottom dwellers of the sea who always appear vaguely supernatural; or maybe in the vast and spectacular vertical abyss of our sky is where the secrets are kept, dispersed amongst the universes we have yet to discover and watched over by the oblivion that rests in the stars.

Maybe it’s the belief that after we die in this lifetime that our souls will be sent to either Heaven or Hell, that journey being predetermined by the choices we have made in this life; or maybe we will be reborn in a different form, and be continuously reincarnated until complete union with this “God” is reached. But maybe our bodies will simply disintegrate as our souls slip into obscurity, and as the years pass, it is only a matter of time until your existence is completely and utterly forgotten. But maybe not.

Isn’t that the beauty of believing? Your beliefs can not be dictated by an elder, a teacher, a government, or even a universe. Your beliefs are dictated by you, and only you. Don’t get me wrong, your beliefs can be influenced by all of the significant persons and groups in your life, but the ultimate decision as to what you believe is yours. And despite the fact that some countries and cultures are restricted from expressing their beliefs publicly, the concept of believing can never have limitations put on it. It’s the ultimate freedom that no one can be stripped of, that no tyranny can restrict, and every human being has infinite access to.

Maybe you believe in and live for the simpler things in life:

…that laughter is the best medicine, rain has the power to wash away all of life’s problems, unexpected compliments, a slurpee on a hot summer day, laughing and reminiscing with a good friend, getting messages via snail mail, running, chips on sandwiches, random acts of kindness, the innocence in the smile exchanged between two strangers, a weekend at the farm, the perfection of a brand-new jar of peanut butter, the smell of the ocean, the satisfaction that comes with having a good comeback, feeling confident (even just for a day), lyrics to a song that are unbelievably relatable, a team feeling more like a family, a mother’s kiss still being the most effective way to heal your wounds, a father’s strength still being the reason that you fight even when you feel like fleeing, a blanket straight out of the dryer, mayonnaise with fries, someone who unexpectedly remembers your birthday, breathing, using music to express yourself, friends you can be weird (like weird-to-the-point-where-you-question-your-mental-sanity-weird) with and laugh with, finding comfort in knowing that everything happens for a reason, becoming a pro basketball player for the second it takes your garbage to reach the trash can, knowing that one person who will always message or talk to you (whether it be 2am or in the middle of their own breakdown), being extra skeptical of things on Friday the 13th, when a teacher calls on you when they don’t think you’re listening and you give them the correct answer, knowing there is always somebody out there that has it worse than you do (so don’t complain), when someone gives you a piece of gum without you asking for one, peace, happiness, acceptance, love.

I believe that I am not clearly aware of all of the things that I believe. But I do believe that believing gives us all this sense of freedom and the ability to develop into unique individuals with independent minds and thoughts. Not only this, but it gives us this incredible sense of control over our energy. If something utterly horrific happens to you, you can believe it was meant to ruin your day, week, month, year, or life, or you can choose to view it as something intended to make you stronger, to make you a fighter, and teach you to fight for what you want in life. Believing is not a verb, it isn’t an action word, regardless of the formalistic and professional definition provided by the dictionary; it is a concept and a power. A power all of humanity has access to, and along with this power, we have this incredible instinct to harness it, to transform our memories and experiences into our own personified belief system. Not a single soul has the ability to alter, judge, or drastically change your beliefs besides yourself. And through these words I have not managed to touch on even a handful of beliefs in the grand scheme of things; however, I don’t find that I need to.

You know what you believe, and I know what I believe.

I believe in the power of believing.

10 thoughts on “Believing in believing…”