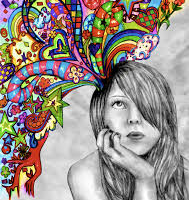 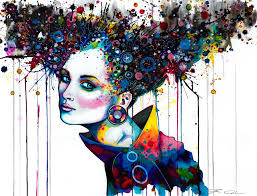 Imagination is a mystical, iridescent substance that is borne within the minds of all children. There in our minds, that unique brand of imagination will exist for all time, and yet the more that one uses it, the more powerful and colorful it will become. The phenomenon of imagination extends from childhood wonder and terror, to some of the greatest feats of human achievement, to the infinite possibilities of the future.

From my elementary days well into middle school I was never quite comfortable unless I was spending time in a world that I created. I loved that I could set the rules, I loved that for once I was in charge. I had the power to decide how things happened, and the power to create any kinds of fantasies that I wanted. Living in my head during most of my days made me quiet and introverted, with only one real friend who was much the same way as I in terms of allowing her imagination to run away with her. During recess, we would play vivid pretend games- except that they didn’t feel like pretend; everything that the two of us created was very real to us both. And everything that I create nowadays, stemming from my vibrant imagination, is just as real as it used to be when I was in elementary school, daydreaming my way through math class or becoming somebody else for a day.

Imagination is the ability to see every path of the future at once, but more significantly, to see futures that at the current moment are impossible. Imagination is what drives us to achieve high, to examine those seemingly impossible futures and find ways to make them our new realities. The world-encompassing power of imagination directs human attention to things well beyond what we already know; facts and knowledge are limited to what we currently understand about the world, whereas imagination is anything but limited. It is the material from which the fabric of the future is woven; it embodies all possibilities and everything that we may create, ascertain, and discover.

But imagination and its irrefutable power has reached far beyond comforting children and inspiring works of art and beauty. Imagination is the condition that allows for the creative thinking of human beings, it is the basis from which all forms of innovation have stemmed. The world and its past as we know it has been heavily influenced by the almost magical power of imagination’s gifts of technology. Without imagination and the subsequent innovations of Phillip of Macedonia, would Alexander the Great ever have created his empire and conquered the whole known world? Without the creative, unexpected tactics dreamed up and carefully executed by Hannibal Barca, the Carthaginian general, would Carthage ever have been known as Rome’s greatest adversary? Without the spark of inventivity borne from imagination, would we have the wheel, the lightbulb, or the computer, all of which we take for granted today? What state of disrepair and decrepitude would human society be in if not for the progressive, transformative abilities of imagination?

Yet for all the good that it can do, imagination can be incredibly destructive if one allows it to be. As a worrier and an unwilling pessimist, I can certainly attest to the dangers of catastrophizing and allowing imagination to run constant scenarios through a mind. I understand how sorting through the multitude of things that could go wrong can drain a person. Imagination captures and holds people, both positively and negatively.

I remember in preschool and kindergarten having a cast of imaginary friends. One companion in particular, whom I had named Cissy, was my best friend by day and my tormentor by night. When light streamed through the windows and we revelled in the glory of daytime, we were friends and equals. In my dreams, however, she became a terrifying figure that represented everything that I was frightened of. In these reoccurring nightmares, Cissy would appear to me as a protector at first. She would take my hand and lead me through a landscape that I couldn’t see because of a black fog. And then she would disappear. Cissy left me alone in the dark, and before anything else had a hope of playing out, I would feel her icy fingers tickling my neck. And then her sweet voice would ring out, “Don’t tell anyone.” Every time that I awoke from that dream, I could still feel the tingling of her small, cold fingers on my neck. As a child, I never told anyone about these dreams; even when it was morning and Cissy reverted back to a harmless playmate, I heeded the order that she repeated in my nightmares.

For years I used to wonder why the monsters always came out at night, why everything that I scoffed at- or in the case of Cissy, was at peace with- during the day transformed into grotesque, dangerous versions of themselves as soon as darkness fell. When I was in the first grade, I asked my mother why monsters were only scary at night. She replied, “Because when it gets dark and we can’t see, our imaginations change. They become stronger because our sight becomes weaker.” Previously, I had always thought of imagination as being something wonderful, something to make me unique, and the beloved source for my outpour of writing, even then. But that day I became scared of what imagination might do to me. Eventually, though, I realized that I had power over what scenarios appeared in my head, and of what I imagined. Later that same year, I put away Cissy and ‘lost’ anything that reminded me of her, mostly blankets and trinkets that I had named after her.

I never dreamed of Cissy again. Every time that the branches of trees tapped against my window, or when it sounded like the wind was eerily whispering to me, or whenever the movement of shadows in my room made me think that a monster was coming for me, I tried to reinvent things in a way that wasn’t so scary. The tree branches tapping on my windows were really the fingertips of faeries, who wanted me to let them in. The wind’s whisperings turned out to be secret messages sent to me from a faraway land, in a language that only I could understand. And of course, the shadow belonged to Peter Pan, who would come to retrieve it soon. After being very difficult for a very long time, it suddenly became easy for me to control my imagination and create fantasies belonging only to me. And so the era of my elementary and middle school love for what I could dream up began.

Imagination has the power to torture, to create and to inspire. It is the purest example of beauty- dark or light- that I have been able to find. Imagination is fluid, it is organic. It leads the battle against the dull world of reality, seeking to transform banality into vibrancy. But that is not why imagination is beautiful. The beauty of imagination is that we can control every aspect of it, we can control what we create, and control how it shapes us. Unlike fact, imagination can be many things at the same time, and can also be everywhere at once. So I conclude with an expression of Albert Einstein’s undeniable wisdom, and with what happens to be one of my favorite quotes: “Logic will get you from A to Z. Imagination will take you everywhere.”